The human body contains 60% of water. The brain and heart are made up of 73% of the water, and 83% of the lungs are water. 64% of the skin is water, and muscle and kidneys are 79%. The human body needs water to circulate the organs and body properly, but when the water is low, it can cause problems. If there is a lack of water in the human body, the concentration of blood increases, and fatigue easily occurs, causing headaches, constipation, obesity, and so on. When water is inadequate, the bronchial and nasal mucosa are dry, prone to colds, and the elasticity of the skin also falls. Drinking lots of water do not relieve symptoms and it is important to drink enough water every day often. Water is a must for every life, and for health, you should know and drink water. 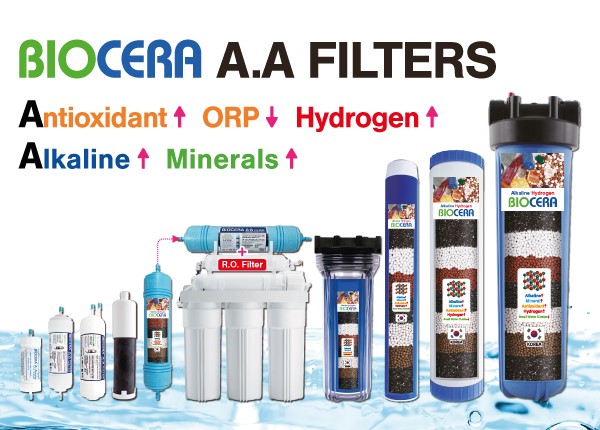 Hydrogen has an antioxidant function and effective in eliminating active oxygen. There were articles on hydrogen, even though hydrogen has high density it won’t be effective. Hydrogen density has 40 ppb, 80 ppb, 500 ppb, 1500 ppb density, but there were no significant differences in dopaminergic neuroprotective nerve system researched by Dr. Mami from Kyushu University, Japan. Comparing to general water, the scale is greater 40 ppb, 1500 ppb and has better positive effects.

As active oxygen is produced every moment, it would be better to drink 50 ccs of hydrogen water occasionally. It is known that the human body can absorb about 50 ccs of water per every cup we drink. Even we drink 100 ccs of water, approximately 50 ccs will be absorbed and the other 50 ccs will be drained to the bladder. Drinking Antioxidant Hydrogen Alkaline mineral water is what matters. Drink Antioxidant Hydrogen Alkaline mineral water every day with small doses then it will separate clustered red blood cells by eliminating harmful active oxygen effectively.

In order to supply oxygen to the cells, the body receives oxygen through the nose every few seconds. Oxygen plays a fire role and generates various incomplete active oxygen. OH-O2 and other unstable reactive oxygen species can eat out invading viral bacteria, but due to excessive air pollution caused by overuse, chemical addition, abuse of electromagnetic wave electronic equipment such as food, shampoo, detergent, medicines, tobacco, Electronic cells? The harmful attack is oxidized. Moreover, since this active oxygen occurs at a few thousandths of a second until aggressive oxidation occurs, we can not artificially control the amount of time to remove powerful active oxygen. So the regeneration has been a consistent life of meditation to minimize the active oxygen, fasting, abstinence, extreme exercise prohibition, irritating food restraint, restraining anger, getting up early, getting up early, and minimizing stress. Especially, by drinking antioxidant green tea from time to time, we have been living wisely to remove the active oxygen generated from time to time. Therefore, in order to protect my body from active oxygen, modern people should drink more hydrogen-rich Biocera water. Since hydrogen permeates everywhere in the human body, it is transmitted to the brain through each cell, and the bad active oxygen is neutralized with water before the reaction occurs.

What are active oxygens (free radicals)?

We breathe air by inhaling oxygen. As we breathe a small number of active oxygens are created. Active oxygen, in other words, free radicals steal electrons from healthy cells causing the imbalance in the body. Unbalanced health cells turn into free radicals leading our body to various diseases such as diabetes, hypertension, Alzheimer’s diseases, constipation, and more diseases.

How to prevent from harmful active oxygens?

Biocera Antioxidant Alkaline rich mineral water has essential minerals such as calcium, magnesium, potassium, and sodium that are important mineral for our body. It is important to choose the right water. Choosing the right water will improve your metabolism and maintain health.

For maximum benefit, please read the instruction manual through carefully before installation and use.

Total Dissolved Solids (TDS) is a measurement of all inorganic and organic dissolved contents in water. (Unit mg/L) According to the TDS value, there is no standard table to distinguish such as factory, sewer, and river water. A high TDS value means that there are a lot of solids that are dissolved. However, it is usually 0 to 50 degrees in distilled water, 50 to 170 is soft water, 170 is considered hard water, 50 to 200 is drinkable, and over 500 is contaminated water. 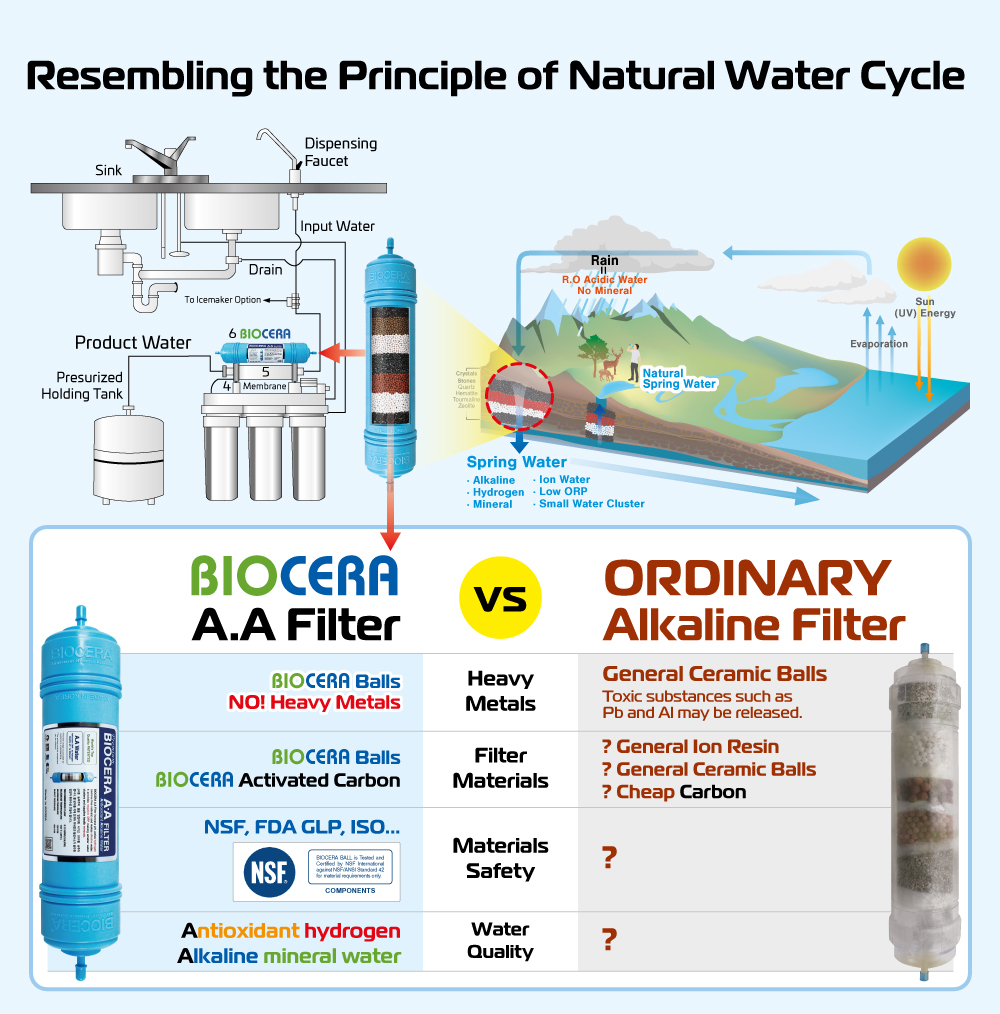 Since its establishment in 1994, Biocera has been doing business with global companies in the United States, Europe, Asia, the Middle East, and Russia for more than 20 years. In this year’s 2019 WQA Las Vegas exhibition, many water experts from various countries came to our Biocera booth knowing the value of Biocera: natural minerals, alkaline hydrogen, and antioxidants. Presently river, groundwater, and the ocean are being polluted due to the increase of population and industrial development which became a serious worldwide crisis. Due to the consequences, reverse osmosis water purification systems are used popular among for reversing water purification for the drinkable state. Reverse osmosis treatments are effective for removing hazardous bacteria, germs, viruses, and heavy metals in the water content, however, the treatment eliminated minerals and turning the water into acidic. This genuine procedure causes a problem for pH balance in the body which alkaline balance is important for functioning our body healthy. Biocera Antioxidant Alkaline water filters can secure these problems by adding minerals in water and increasing the pH in water. Bioceramic mineral crystals inside Biocera Antioxidant Alkaline water filters create the acidic demineralized water content into pH balanced longevity spring water, generates the living-giving water with auto therapy, increased oxygen concentration, far infrared radiation, abundant antioxidant hydrogen concentration, and more. The water passed through Biocera A.A. (Antioxidant Alkaline) water filters resembles just like longevity miracle spring water in Tibet, China, and Lourdes in France. Biocera eagerly struggles to pursuit the ideal momentum of producing healthy longevity spring-like water to our worldwide customers. 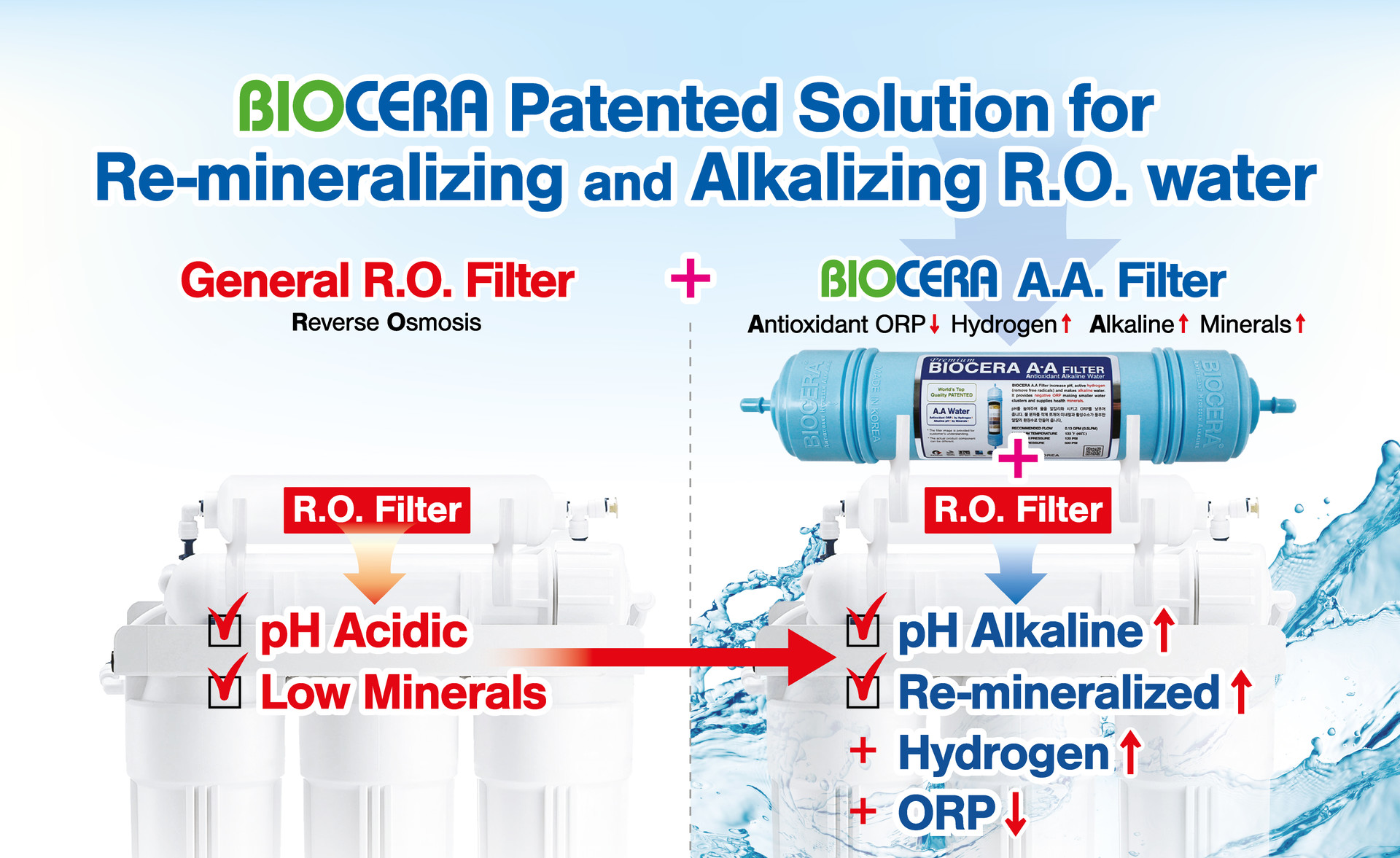 Accessible water sources around the world are being polluted due to the substantial rise in population and the emergence of global warming, which can lead to a serious crisis for the world. Reverse osmosis water purification systems can be used to purify polluted water into a drinkable state by removing hazardous bacteria, germs viruses present in the water. However, this treatment eliminates minerals and turns the pH balance of the water acidic. Ingesting acidic water can be harmful to the person’s health as it disrupts the pH balance of the body. Biocera Antioxidant Alkaline water filters can solve this problem by supplying minerals in the water and increasing the pH balance.

The Story of Dr. Jeon's

Biocera Balls are created in the 1980s with top-secret crystal growth technology using rubies, sapphires, and corundum. The process of manufacturing Biocera Balls too careful selection from raw materials and minerals that do not contain heavy metals. After ... 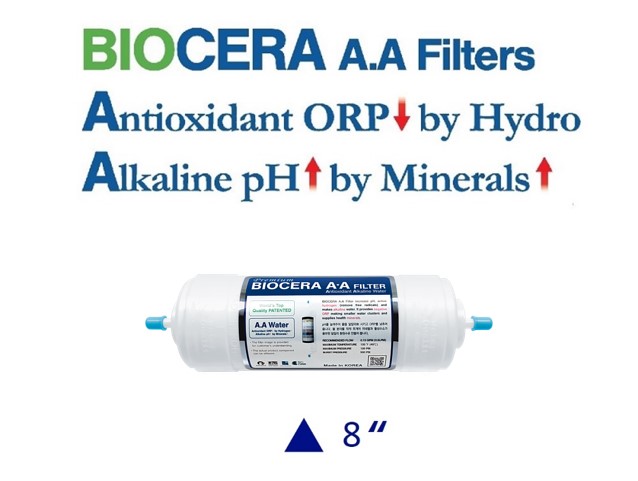 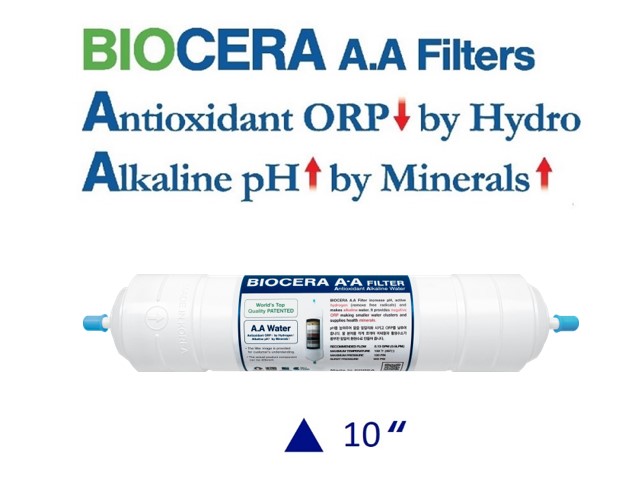 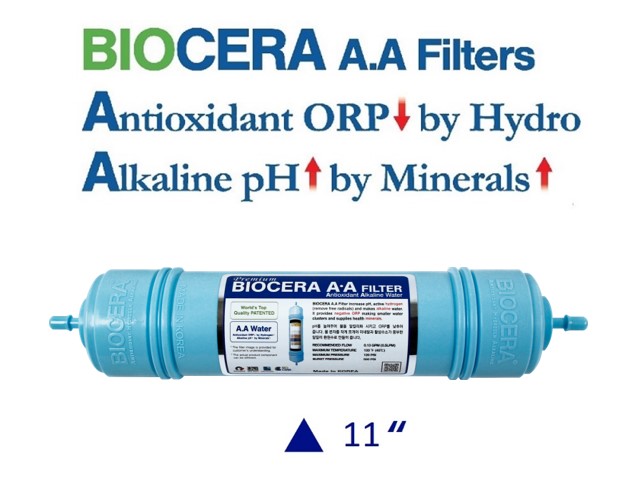 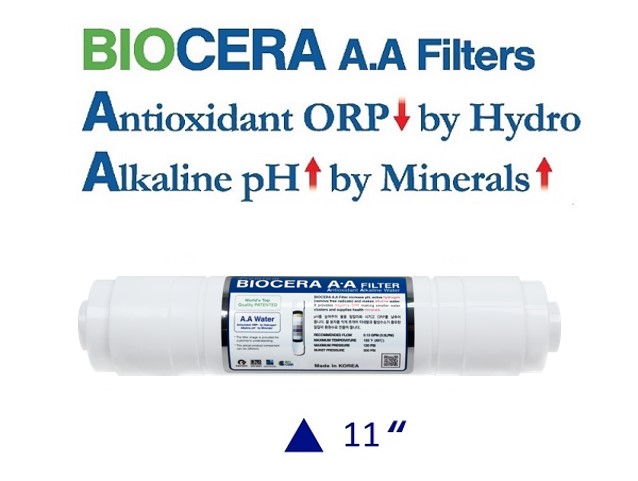 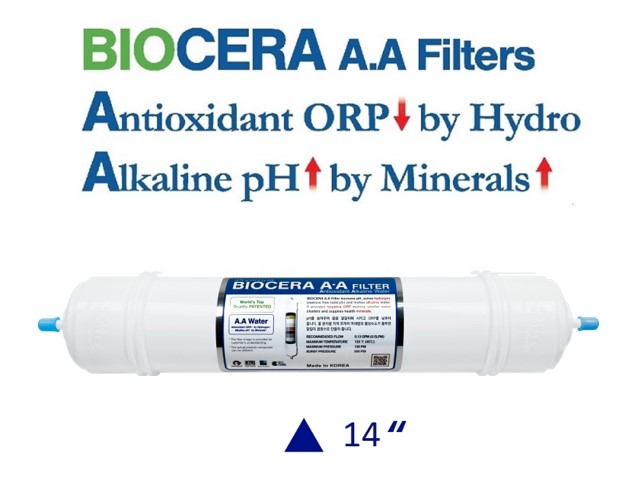 For maximum benefit, please read the instruction manual through carefully before installation and use. 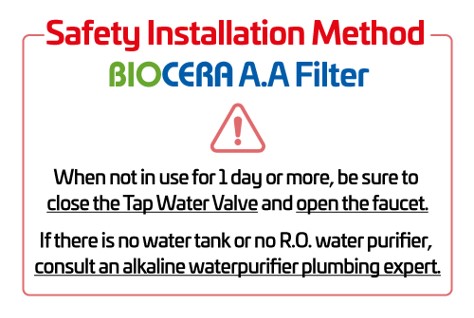 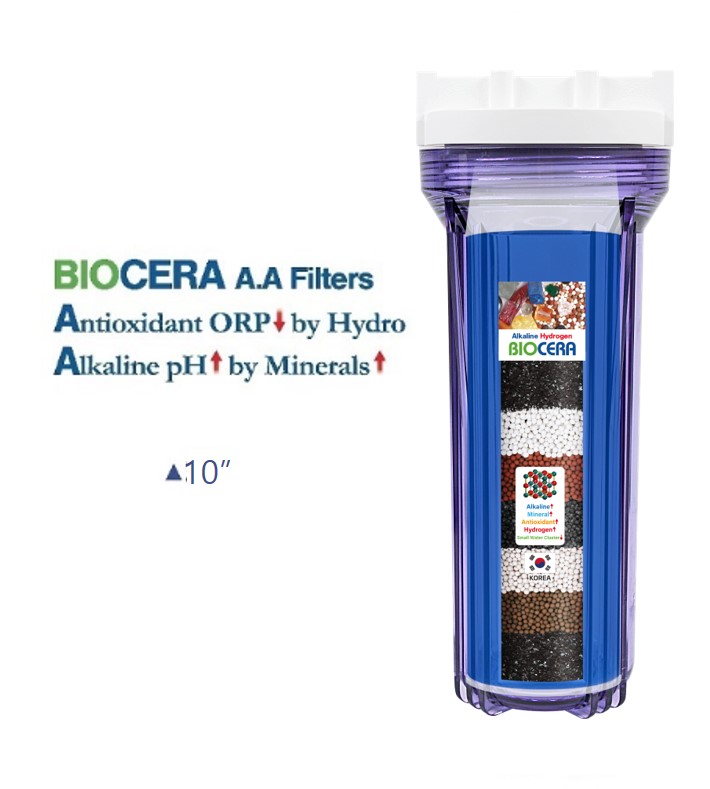 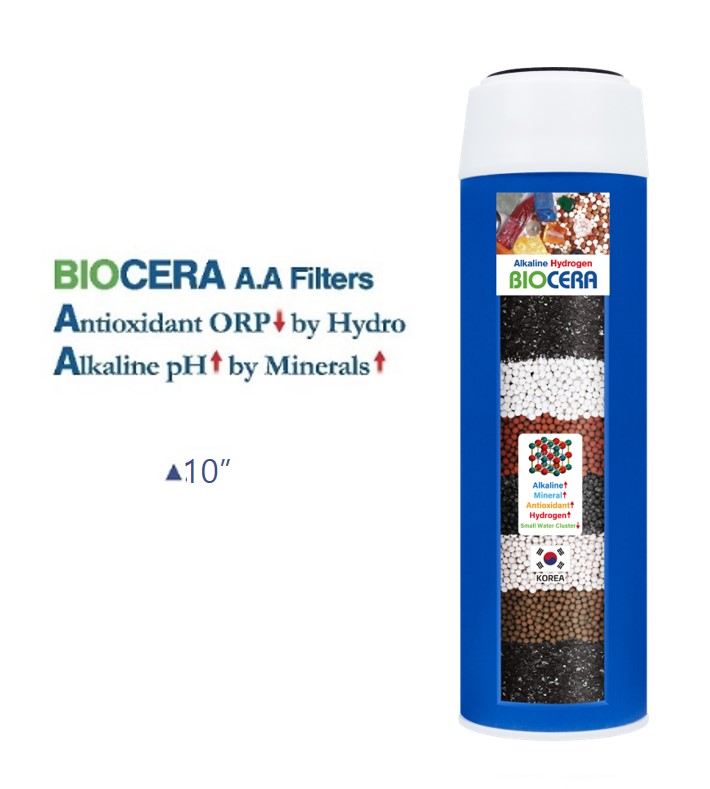 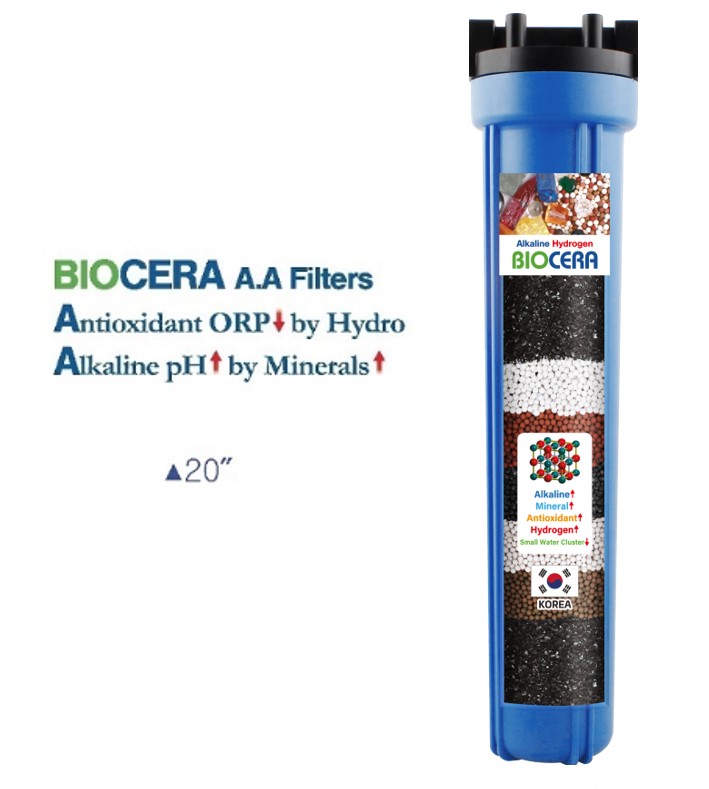 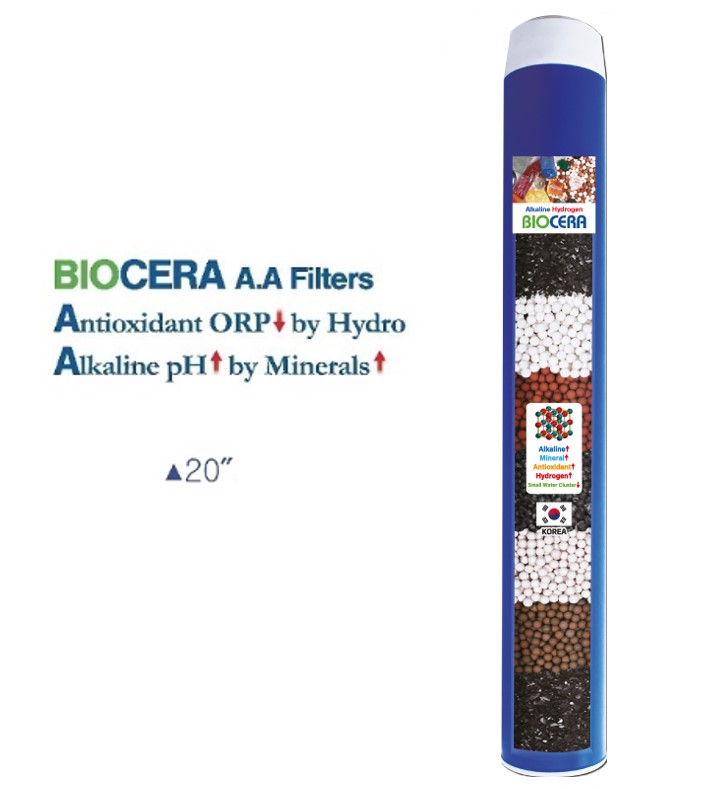 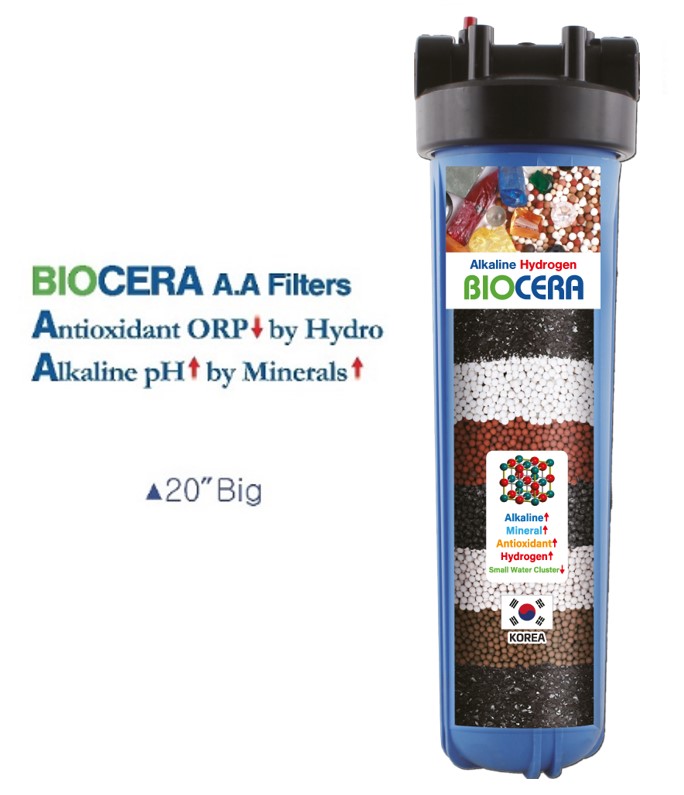