Two thousand years ago, ancient Romans built waterways to supply clean drinking water to homes. Biocera was also developed in 2000 by combining economical, safe, and eco-friendly portable jugs with German technology. Portable Jug pitcher is a product that can be used together by single-person households and four-person families, and can be used at home, in offices, and outdoors. The Biocera balls in the jug filter have been tested and acquired NSF component certification for its material safety requirements only. Biocera dedicates to protect the environment, enable customers to drink safe water, develop eco-friendly products, and leading the hydrogen alkaline field. 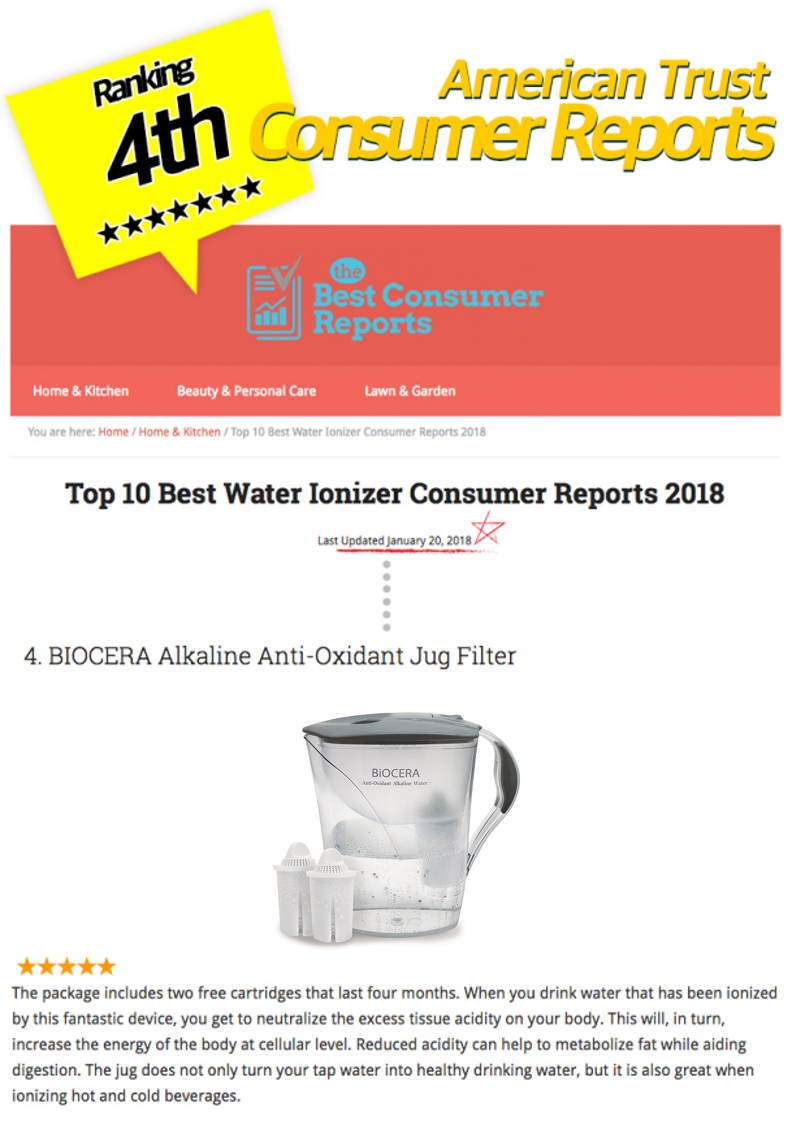 The Story of Dr. Jeon's

Biocera Balls are created in the 1980s with top-secret crystal growth technology using rubies, sapphires, and corundum. The process of manufacturing Biocera Balls too careful selection from raw materials and minerals that do not contain heavy  ...

Biocera A.A (Antioxidant Alkaline), a brand of antioxidant alkaline water, started in 2000 when Biocera met Stephen, a top company with a German Jug  product, met at the Chicago Housewares Fair. At the time, Stephen, who was interested in the material of the anti-oxidation alkali-generating Biocera ball, proposed to apply it to the water purifying jug filter. With that opportunity, the first generation of Biocera alkali reduction return Jug  was developed and commercialized in 2001.

In 2006, at Stephen's invitation, Dr.Jeon, Hyung-Tag (Founder of BIOCERA) went on a business trip to a Jug manufacturing plant in Poland, Europe. Not only biocera from Korea, but also experts from water-related companies from the US, Spain, and Russia were invited together. At that time, the alkaline water market was forming quite a bit in advanced overseas countries, and it was a time when the concept of negative ORP antioxidant power was vague. Water-related entrepreneurs in various countries will be informed of the technology of water with Negative ORP antioxidant power as the pH of purified water goes through the Biocera ball and rises to alkalinity. ORP refers to the strength of the tendency of a certain substance to be oxidized or reduced. In tap water, drinking water, and RO water, the ORP level (mV) increases, whereas in water that has undergone Biocera ball, the ORP level (mV) is lowered like green tea and vitamin C, so it is an antioxidant. you will have power. It can be seen from the experiment with iron nails. As a result of adding the same amount of iron nails to tap water and Biocera water and watching it for more than a month, it shows antioxidant power that quickly rusts in tap water and does not rust in Biocera water.

In 2007, Biocera announced the start of the brand name ‘BIOCERA A.A (Antioxidant Alkaline)’ by adding an antioxidant in front of the alkali of the existing first-generation alkali reduction return Jug. From the second-generation Biocera A.A Water Jug products released under the changed brand name, they are manufactured and exported in Poland, Europe. The background of the birth of the new concept antioxidant alkaline water brand is based on the technological cooperation of the best German water purification Jug R&D technology, a Poland manufacturer with the best production facilities, and Korea’s Biocera, the best ceramic filter material. Biocera have a lineup of antioxidant alkali products and are exporting to more than 40 countries in Korea and around the world. 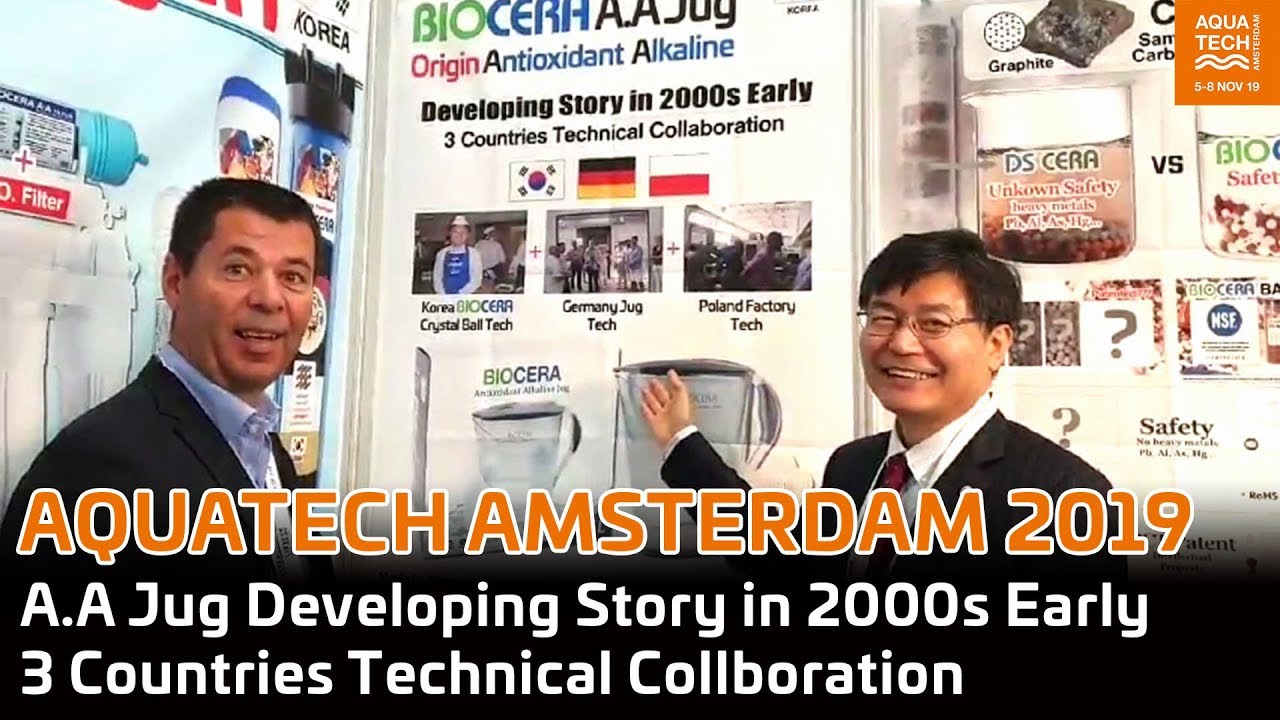 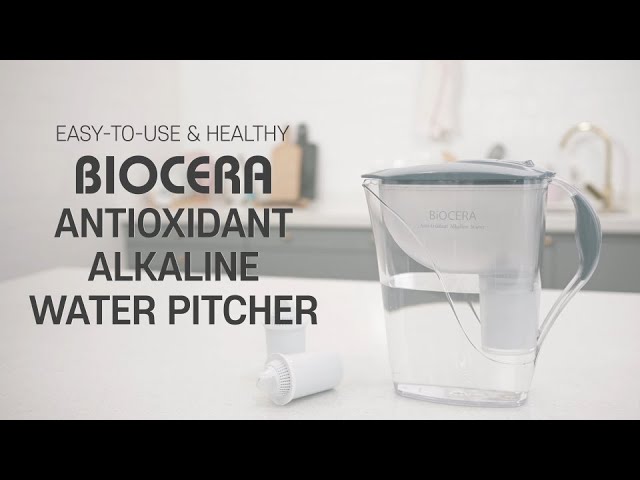 Your Water Must be Better (Video) 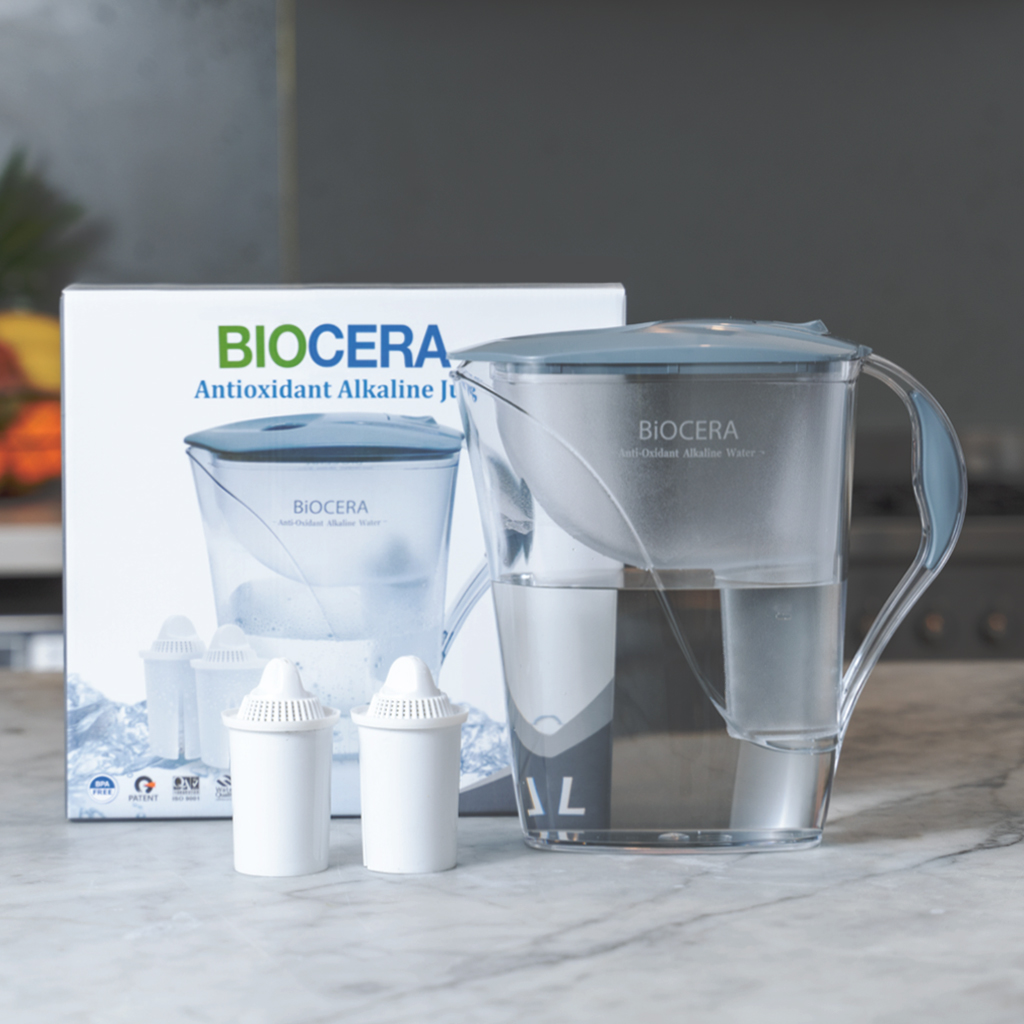 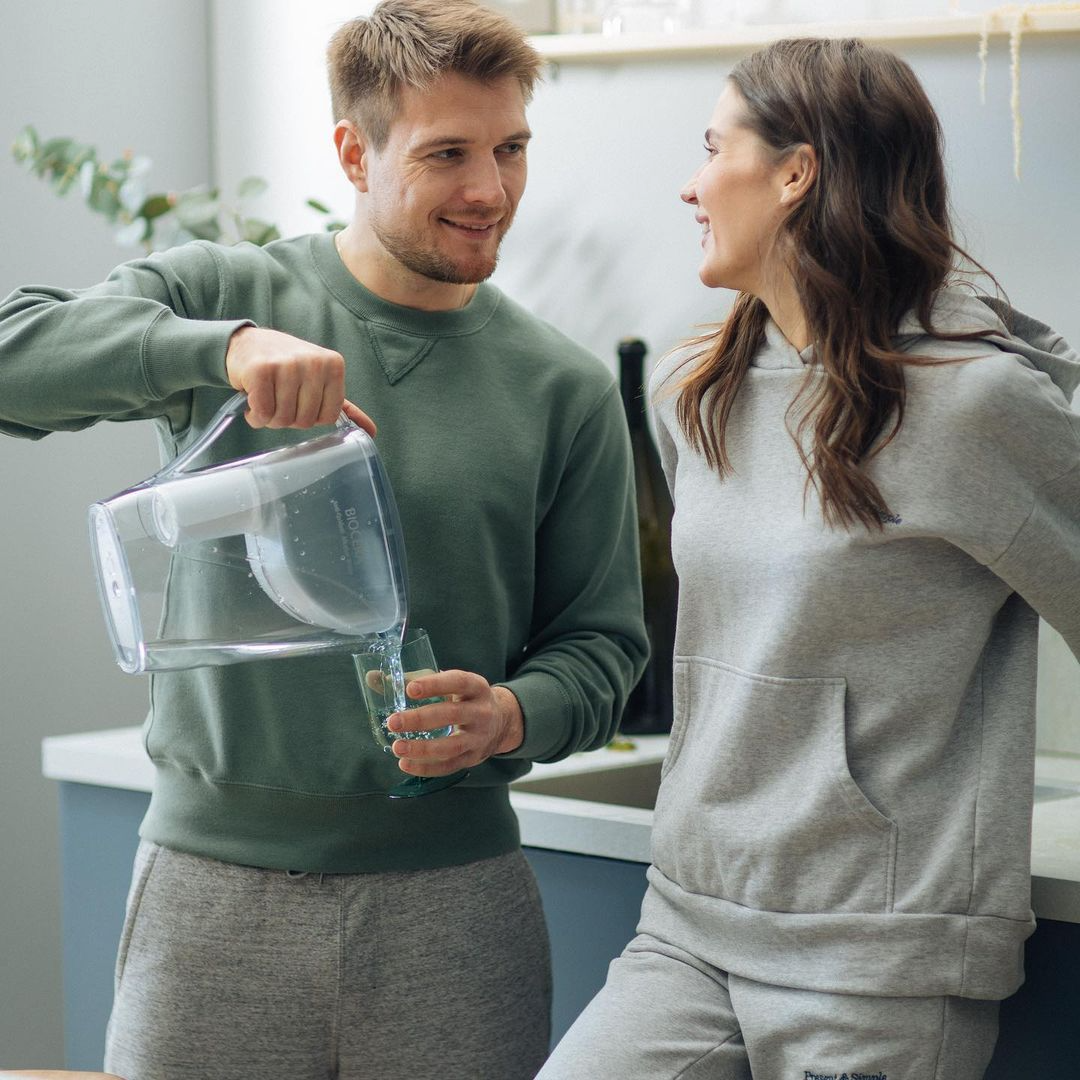 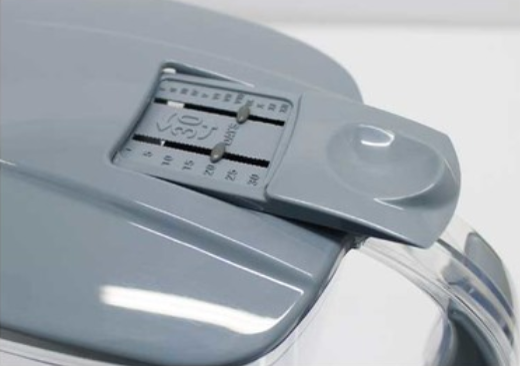 Indicator to let you know when to replace the filter 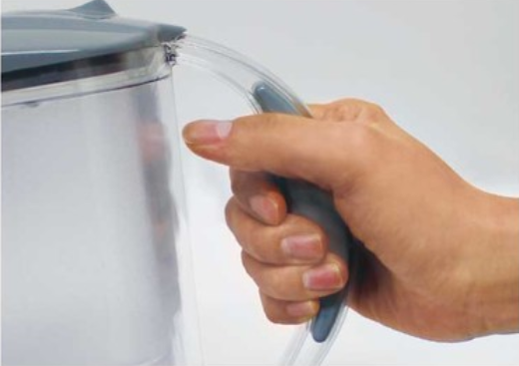 Easy-grip with one hand 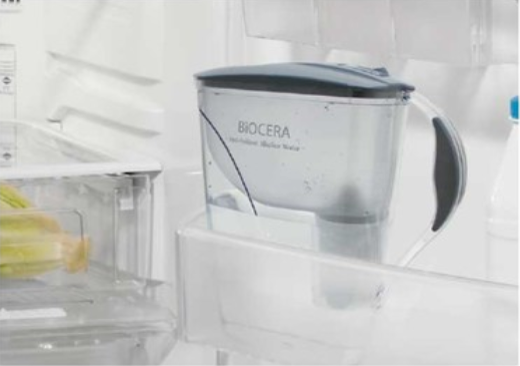 Size to fit all refrigerator compartments 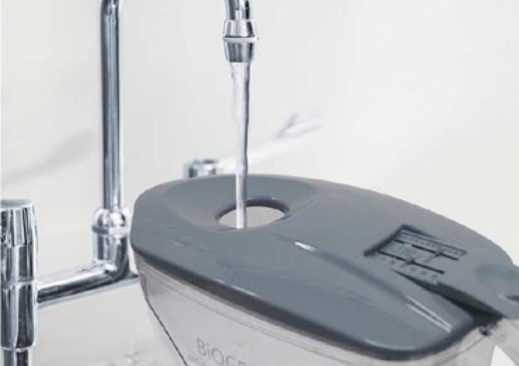 Water refill is possible without opening the jug cover

1. Please take off the filter packaging.

2. Place the filter in a basin or pail of water and shake for 20 seconds.

3. Fill the basin with fresh water, add the shaken filter and wait 15 minutes.

4. After confirming that the black water (carbon water) has run out, attach it to the jug.

***Recommended filter period: 4-6 months (4 months on average, replace if the filter is clogged)***

1. Since alkaline minerals (calcium, magnesium) comes from the water, white foreign matter can stick to the bucket.

2. In this case, add 1 tablespoon of vinegar and tap water and shake the bucket for 30 seconds. (Do not put too much vinegar, one tablespoon is enough.)

3. Do not use dish detergent.

4. Use a clean bucket after cleaning.

The Biocera A.A jug filter replenishes the demineralized water into antioxidant alkaline water with added minerals like calcium, sodium, magnesium, and potassium that help our body to function to its fullest. The Biocera A.A jug filter contains activated carbon that helps eliminate fluoride and chlorine in the water. The Biocera A.A jug filter produces hydrogen that absorbs the activated oxidant-free radicals from the human body. The Biocera A.A Jug filter helps the water to break into small water clusters, turn the water to easier absorption, and overcome dehydration. Basically, this generates a clear and neat water ideal to drink and quench thirst. So, what does it contain and how to operate this Biocera A.A Jug Filter? First is a coarse pre-filter that stops big contaminants from polluting the water. The second PP layer also helps in preventing clogging of the filter and also to prevent small dirt or dust that sneaks inside unnoticed. 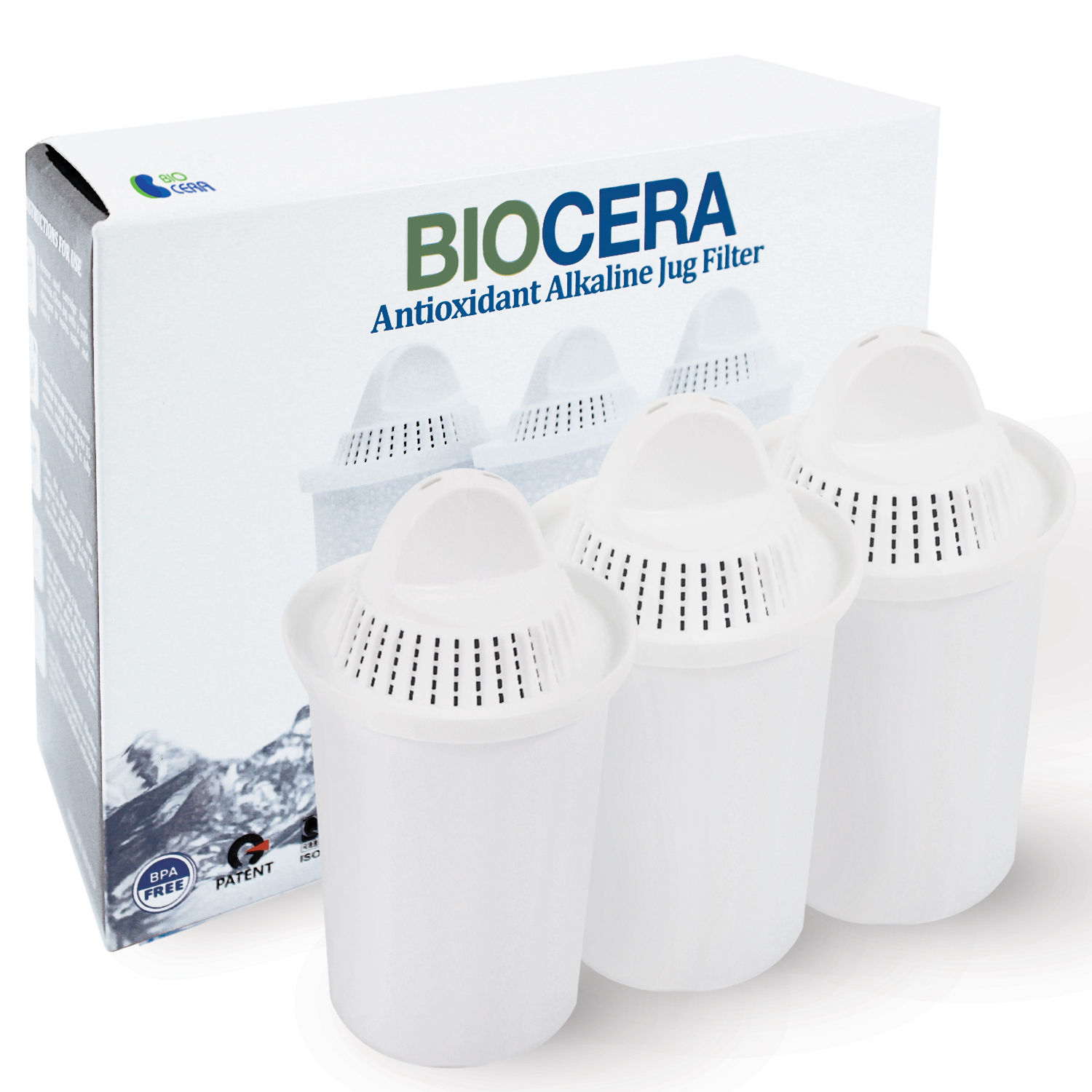 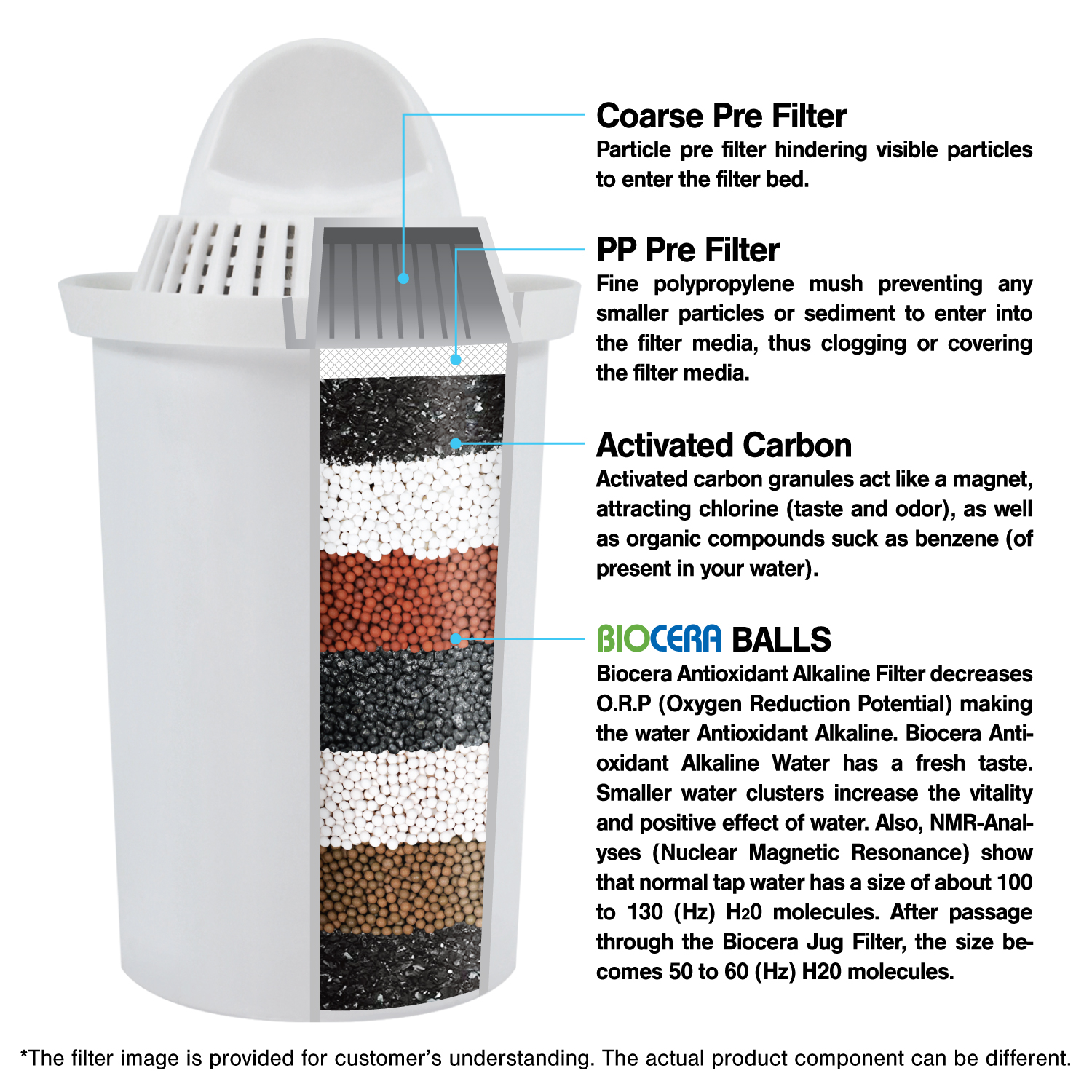 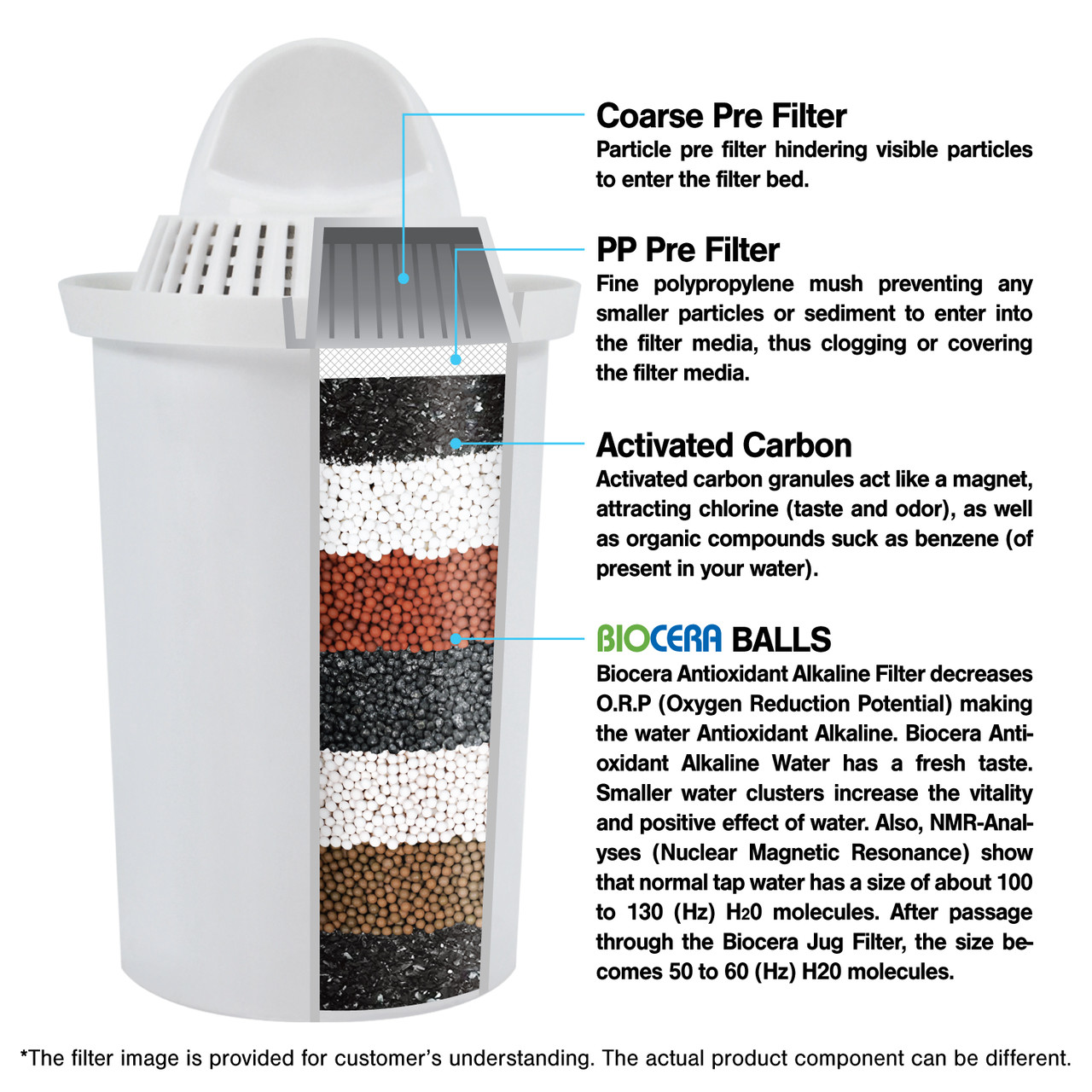 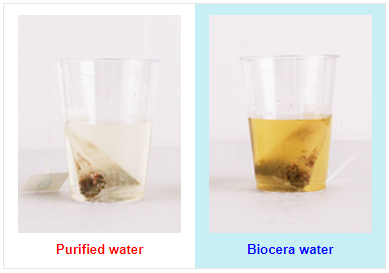 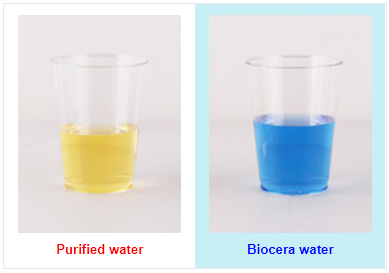 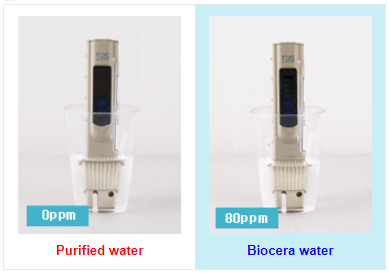 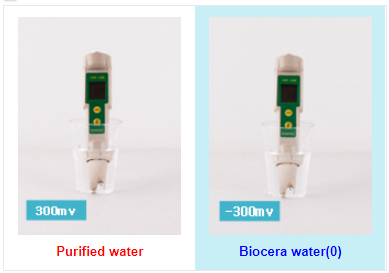 Heard of the crow and the pitcher story? The thirsty crow fills the pitcher with pebbles to raise the level of water and drink is heart full. The same goes with the alkaline pitcher from Biocera where we replace the crow with a thirsty human being and the pebbles with an anti-oxidant mineral enriching filter. Biocera Alkaline Water jug can enrich around 2 liters of water per usage. Biocera jug is one of our patented research projects which helps to add value to water and improve the taste.

What does it do?

Our alkaline water pitcher replenishes the purified water with added minerals like calcium, sodium, magnesium, and potassium that helps to run the heart, brain, and body to their fullest. Also, our pitchers contain excessive Hydrogen to absorb the activated oxidant-free radicals from the human body. Also, this mineral water jug is easy to transport and safe to carry. They contain water clusters that are capable of increasing body hydration and water retention in the skin so that it does not turn itchy and lose moisture. Basically, this generates clear and neat water ideal to drink and quench thirst.

What is the pitcher made up of?

So, what does it contain, and how to operate this alkaline water jug. First is a coarse Pre-filter that stops big contaminants from polluting the water. The second PP layer also helps in preventing clogging of the filter and also to prevent small dirt or dust that sneaks inside unnoticed. Thirdly, this super-duper filter comes with an active carbon bed that can absorb organic wastes from human blood.

The antioxidant filter reduces oxygen potential by counterbalancing with the hydrogen ion. To be healthier, wealthier, and merrier all one has to do is to book our Biocera alkaline pitcher right now! Drinking water when thirsty is what any common man does. But drinking safe, mineral-rich, and purified water from an alkaline jar to stay away from diseases is the thought of the day- and this is exactly what we at Biocera aim at!